While I posted these image to my social media sites shortly after my trip, I haven’t yet told the story behind these so I thought I’d feature them on the blog this week.  Back in August I had the chance to visit Portland, Oregon for a trialing conference and took the opportunity to go exploring whenever the seminars were done for the day.  The first day my plane actually landed early and I couldn’t yet check into my hotel, so I took the opportunity and drove east to the Columbia River Gorge, where I made this image of Multnomah Falls.  Multnomah is a 611 foot cascade that is said to have been created to win the heart of a young princess who wanted a secluded place to bathe.

The following day my seminars ended around 5:30 in the afternoon, so I quickly hit the highway and drove the couple of hours east to try and get a shot of Mt. Hood.  It probably wasn’t my brightest moment – being alone on a winding mountain pass in the middle of nowhere near sunset and underneath buzzing high-voltage power lines – but sometimes you just have to get the shot!  This was taken from Lolo Pass Rd., where coming around the numerous bends Mt. Hood looms larger with each one.

The next day was my last opportunity to get out and explore, so this time I headed west to the coast.  I headed for Cannon Beach, the famous site of Haystack Rock that was used in the filming of The Goonies.  I had hoped to catch sunset behind the 235 foot basaltic sea stack, but between the smoke in the air from the fires in Washington and the marine layer that had drifted in a sunset was not in my favor.  It was still an amazing experience and I can’t wait to visit the beautiful Pacific Northwest again some day! 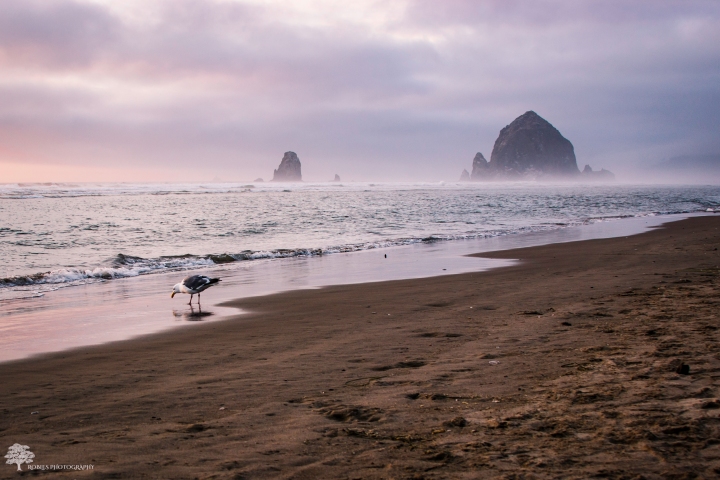